A tough day's walking but so rewarding not just for achieving the 694 m top of Pen y Ghent in North Yorkshire for the first time.  We walked up the steep way from Horton in Ribblesdale with quite a scramble from the south of the final push. Everywhere is very dry and it was surprising to see flowering heads of Hare's-tail Cottongrass, Eriophorum vaginatum, in what seemed to be quite a dry patch of ground.


The icing on the cake was seeing Saxifraga oppositifolia [Purple Saxifrage] just at its best on the limestone cliffs below the summit on our way down. 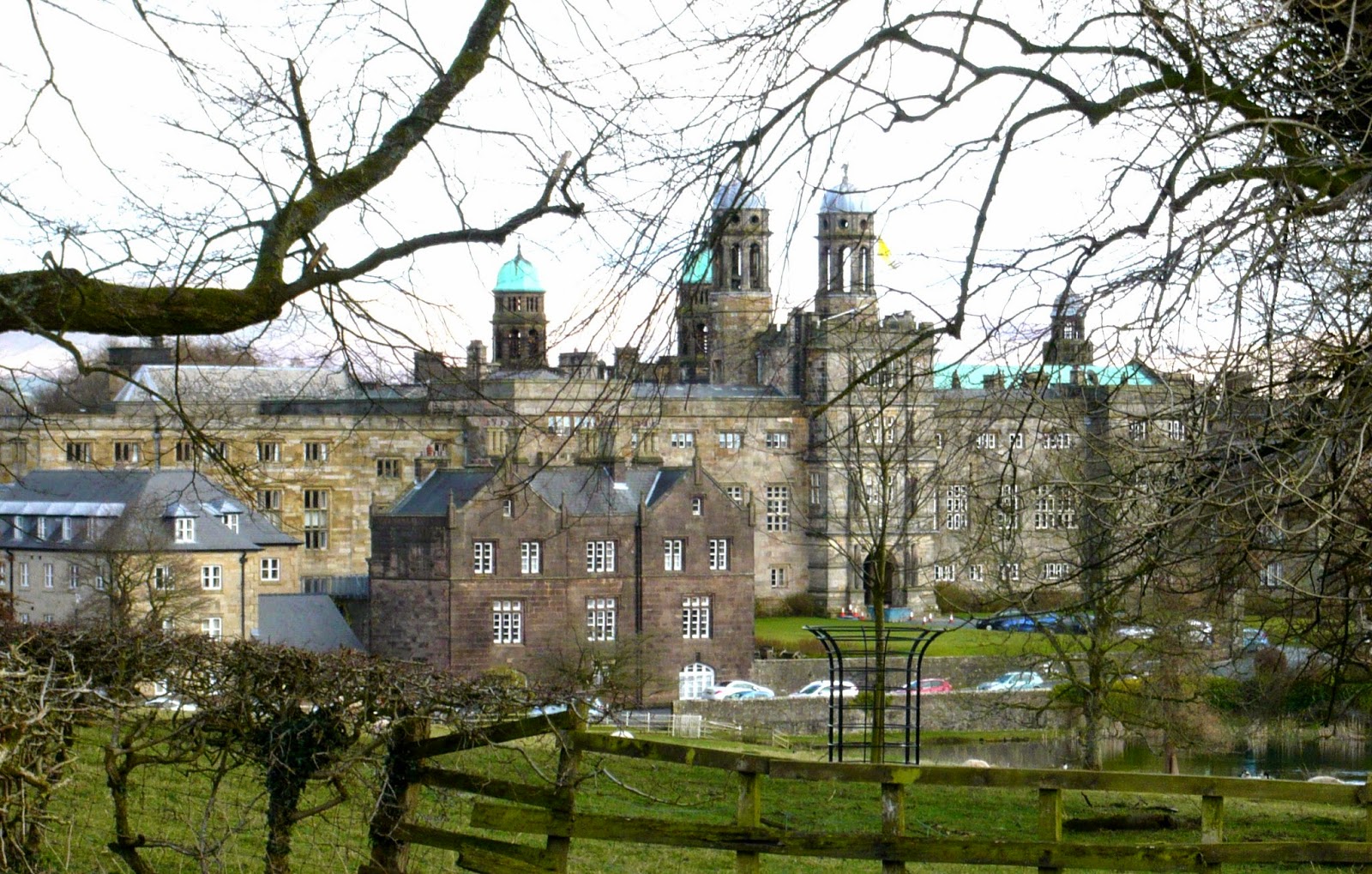 Some fine spring weather tempted us out into the Lancashire countryside and we started at the golf club at Hurst Green.  We walked up the drive towards Stonyhurst College, which looked extremely imposing - and surely quite frightening for a young boy [or girl] arriving there for the first time!

We went wrong almost straight away but were grateful that our mistake took us into the village of Hurst Green and past St Peter's Club where a warming cup of coffee speeded us on our way again.

We walked along Dean's Brook which runs into the river Hodder near the School.  It was a charming scene, I thought somewhat marred by the carpets of the naturalised alien Fringecups, Tellima grandiflora, along the banks of the brook.

We were six botanists who met in Tywyn, to record in a square with surprisingly few records.  SN59 is a tiny hectad in Merioneth, not much more than a single tetrad, about 4% in area, but it has a fine number of older records, with over 300 species needing updating before the new Atlas appears in 2020.

Sadly for us that day, it seems to be a very late spring, with the recent frosts holding back the new season's growth.  Even with the help of Poland's Vegetative Key to the British Flora, we only made around 50 records, but consoled ourselves with the thought that, unlike last year, there should still be plenty to see later in the summer.

We spent some time looking at some dead heads of putative Centaurea debeauxii, Chalk Knapweed, One of the defining characters is the shape of the centre of the distal  part of the phyllaries.  In C nigra it is quite broad, whereas in C debeauxii it is narrow.  In our specimen it was extremely narrow, however, the swollen part of the stem just below the capitulum was really markedly swollen.  I suspect that Stace isn't convinced by the split either! [see diagram in Stace, 2010 p. 699]

On a blustery, cool day we walked from near Neptune Hall over the heavily-grazed meadows which looked promising for a later expedition,  The area is damp and slightly brackish, with drainage ditches dissecting the raised beach, and with low dunes protecting the land from the waves. We were glad to get out of the wind for our lunch and were delighted to see a large flock of Golden Plover roosting just in front of us apparently not at all disturbed by our munching.  Even when we walked on they sat tight, until they blended with the background and we could no longer see them.

The dunes were disappointing with almost none of the expected early ephemerals to be seen.  Only the vivid green of the Sea Mayweed, Tripleurospermum maritimum, broke the monotony of Marram Grass, Ammophila maritima, bare sand and the litter left by earlier visitors.  However, we were enchanted by the "drowned forest" in the intertidal zone just south of  Tywyn and the peat beds with the mediaeval cutting marks clearly showing. I've been reading it all up on a very illuminating report: [Smith, 2004] which explains the time scale over which the sea level rose and fell after the ice sheet had gone.

Although our French 'chateau' is almost 700 miles south of Preston, it is fairly high up there, and spring is only a little earlier than in North Wales.  We had a lovely spread of snowdrops in the woods by the River Sioule and the Wood Anemones, Anemone nemorosa, looked lovely.  Pulmonaria longifolia, Narrow-leaved Lungwort, was abundant in the garden, as elsewhere in woods and hedgebanks, but this time we only saw a couple of plants of the attractive Bird-in-a-bush, Corydalis solida, which was abundant here last year.

The lovely damson-coloured leaf-rosettes of Euphorbia amygdaloides, Wood Spurge, were already showing above the leaf-litter and there were dramatic spikes of Helleborus foetidus dotted through the woods


It was a hard-working stay this time.  We still have cement mixers in the garden but the end is in sight of applying the enduit, the vernacular rendering that protects the soft local limestone used for building. And we finished the holiday by laying around fifty paving slabs each with an estimated weight of 17 kg, to make a dry walkway from the campervan to the house.

It was great to have lovely weather and
a nice turnout for this not-very-promising
meeting - it felt as though spring was
really on its way!

We drove up to the reservoir above Cynwyd by the very narrow and exposed lane, high above the waterfalls on the river Trystion. We parked and had a lovely walk on forest tracks through three different tetrads. That always makes it difficult to remember to write everything down as we go from one to another [and sometimes back again to the first, as we did this time!]

The area is noted for a small population of red Squirrels and possibly Pine Marten, but we saw no signs of any mammals.  Crossbills were singing but botanically it still felt very wintry. We spent some time looking at the conifers planted in the area, including Noble Fir, Abies  procera, Giant Fir, Abies grandis, and a single small tree of Crypotomeria japonica, Japanese Red-Cedar We made 120 records altogether, [in SJ04, 3 were new hectad records]. The best native plant we found was Carex flacca in a small and potentially interesting flush beside the road - the leaves caught our eye first and then someone [who?] found a withered flowering spike from last year.
Posted by Sarahvc48 at 05:36 2 comments:

We all decided at our planning meeting not to meet in January, but as Heather and I both felt like an outing we arranged to meet in Pennal [where there is a great bar and restaurant, The Riverside, for shelter!]  We festered over coffee for ages, and then, as it was still raining, had lunch, before we set out in lovely sunshine to walk down from the village towards the River Dyfi.  Nothing sensational, but we had a good walk between the showers.  One of the more interesting plants was this dock - probably Rumex crispus subsp. littoreus, the seaside subspecies of Curled Dock, with its leathery, slightly glaucous leaves - interesting because we identified very little else to tell us we were in coastal territory.
We also saw a couple of large clumps of Scrophularia auriculata, Water Figwort, with its obtuse, rounded leaves still green and the wings on the stems,  though withered, still very much in evidence. It is strangely uncommon in West Wales, having a south-easterly distribution in Britain.

The tetrad SN79E had no previous records and the hectad [which is only just in Merioneth] had only 39 records so we were pleased to make a good list, adding another 60 species. It  definitely deserves a return visit in the summer: judging by the number of new records for the hectad, that area had never been visited before.
Posted by Sarahvc48 at 09:17 1 comment:

January again, and with the whole of a busy 2015 to look forward to, our plans have been blighted by the news that we are to lose our wonderful Welsh Officers, Polly and Paul, due to lack of funding.

The Welsh botanical community has always been very active and cohesive and the support of these two has made it so much more so. Their help includes offering support with Mapmate and data input, helping to organise field meetings, gently urging along our Rare Plant Registers, [making Wales potentially the first of the countries to have complete coverage of these] liaising with Local Records Centres and with Natural Resources Wales.  In the field their skills and support have enabled Vice-county recorders to re-find plants recorded long ago and they have carried our further monitoring of rare plant species.  Two such appropriate people for their work would be hard to find - and, on top of all this, they are so nice to work with!

We feel that this decision has been a big mistake and hope that all is not lost even if it has to mean reduced working hours -  we are all lobbying hard for it to be reversed.